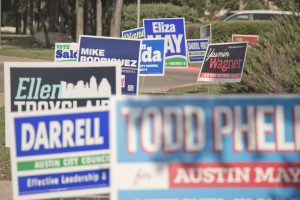 Political Yard Signs at Their Best!

What if I said yes and no? Political yard signs have been around for a long time which brings people to ask how efficient they really are. Surprisingly enough, they are effective to the point where they can help a candidate by a little more than a percentage point. However, if you’re running for federal office then I wouldn’t count on it.

A study performed by Columbia University – more specifically lead author Donald Green – told POLITCO that yard signs can add 1.7 percentage points on average. So yes, they help, but not as much as we have previously believed. According to the researchers, “It appears that signs typically have a modest effect on advertising candidates’ vote shares — an effect that is probably greater than zero but unlikely to be large enough to alter the outcome of a contest that would otherwise be decided by more than a few percentage points.”

“We were surprised by these findings, because the conventional wisdom is that lawn signs don’t do much — they’re supposed to be a waste of money and time. Many campaign consultants think that signs ‘preach to the choir’ and not much else,” says Alex Coppock, a co-author in the study. At $3-$10 bucks a pop, it’s not hard to see why consultants would say or think this. That would also bring up more questions like; how many political yard signs can your candidate’s campaign afford? Who’s going to place and pick up your signs? It seems to bring more hassle than relief but there is a small light at the end of the tunnel.

“My guess is that part of the reason that the effect is small is because any campaign tactic — signs, ads, mailers, calls, etc. — only move people around at the margin. In many ways, it would be strange if the effect were bigger. Imagine a world in which the presence or absence of lawn signs could swing an election by 10 points.” Coppock later adds. If this were the case, many consultants would have their candidates’ campaign based around that tactic, along with a sizable budget to allocate those needs. That would leave too much uncovered ground, in many aspects, and make it too easy for someone to win, simply because they had an amazing campaign sign. Not only does that seem both, unfair and unfitting of a candidate, but also ridiculous. Thankfully, that’s not the situation.

We can say that lawn campaign signage definitely won’t change any time soon, merely because there is still such a high demand for political yard signs. Also, we need to take into consideration the psychological effect that lawn signs can have on the opposing candidates. Seeing enough of your competition’s signs scattered amongst the community, that your trying to up-keep, can really deter a candidate’s enthusiasm and possibly shy them away from the idea of running completely. Plus, some supporters are going to feel comfort in having the person they support on the signs in their front yard. Either way, Political yard signs are a staple in campaigning and are going to remain so until a new, revolutionary tactic comes about. Until then, Super Cheap Signs will be here to answer the call.

Tagged with: needs an update